The original Maverick – A true story 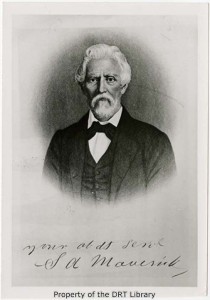 Samuel A. Maverick was a lawyer in south Texas during the middle of the nineteenth century.  To settle a debt of $1,200, a client gave Maverick four hundred head of cattle.  Little did Mr. Maverick know that these cattle would immortalize his name.

With no experience as a cattle rancher and no immediate use for the animals, Maverick thought about the situation and acted in a way no one expected.

The ranchers didn’t recognize his subtle genius. Maverick was about to change the rules of the game.

Not long after releasing his cattle, Maverick shrewdly announced that any cattle found without a brand in southern Texas were his cattle—a bold move that baffled other ranchers and caused a general uproar.

Maverick eventually sold his herd (a “few” heads larger than his original 400 count), but the word maverick became widely used throughout the West to describe any unbranded cattle roaming free in a world at the junction of convention and non-conformity.

The name maverick was also soon adopted in England, where well-known English writer Rudyard Kipling popularized it in one of his stories, “A Mutiny of the Mavericks,” in which he described the Irish Royal Loyal Musketeers as “masterless and unbranded cattle.”

Today, the term maverick is often used to describe freethinkers and original individuals living life on their own terms and choosing not to be defined or “branded” by social norms or conformist labels.

Get your copy of the Maxims for Mavericks book Samuel Maverick inspired.

A poem by Kent Healy

Beyond the constraints of a monotonous environment

Remaining free in spirit and in mind

Without regard to the status quo

There is much more out there, that they know

Always searching and thinking too

Never taking “no” for an answer, only “yes” will do

They inspire, create, invent, and explore

Allowing those around them to grow and know more

Their insatiable curiosity and compassion for life

Drives them to seek ways to eradicate strife

Often driven by a passion to serve

They help others create the life they deserve

And although nothing is certain, they will take a chance

Never fearing to ask the hand of opportunity for a dance

They blaze their own path pushing aside the imitations

Helping themselves and others exceed their own expectations

“You can’t do that,” they are told

They break the conformist mold and risk looking like a fool

But in the process they become the exception to the rule

The Maverick will not be discouraged or stop

They refuse to give up until they’re at the top

They define success and what it means to live

By accepting nothing less than the best they can give

They step up to the challenge and never abandon the cause

Helping humanity advance past its flaws

Because they think they can, the Maverick always will

They understand and use the power of free will

Get your copy of the Maxims for Mavericks book Samuel Maverick inspired.